Did you find your crush staring at you?

Maybe deep down you are excited because your feelings are being returned.

Either way, in this post, I’ll list all the possible reasons why your crush is staring at you.

1. He is genuinely attracted to you

Perhaps he fancies you.

And he is genuinely attracted to you.

So, that’s probably why he is staring at you.

2. You’re in his line of sight

There is a very good chance that he is trying to look at something ahead of you or you are just in his line of sight.

Can you count the number of times you’ve tried looking at something in the distance but the person between the thing and you think you’re looking at them?

It’s happened too many times to count.

And mostly when I’m trying to catch a cute dog’s attention – people in my line of sight think I’m awwing at them.

3. He is lost in his own thoughts

There is a slight chance that he is not at all thinking about you and is just randomly looking at you.

The reason why he’s not taken his eyes off you is that he has zoned out.

It happens to all of us at some point and we just don’t realize that we’re staring at someone or something.

4. You’re beautiful or have unique looks

Maybe you are really pretty or just look unique.

I consider myself an average-looking person because I do get stared at a lot because I have very unique hair and I’m tall for an Indian woman.

People stare and it’s perfectly alright – I’ve gotten used to it and made my peace with it.

So there is a chance that he is just looking at you because you are an interesting person to look at.

5. He heard something about you recently

Perhaps someone was talking about you recently and he was replaying it in his head.

So, every time you cross his mind, he is infact looking at you.

It’s normal – everybody does it.

6. He is thinking about you

Maybe he is thinking of you.

Women are more conscious and from my experience, we learn to draw personal boundaries at a young age.

Women in general are just more careful and very inconspicuous.

Men on the other hand aren’t.

They are quite forthcoming with their needs and if they like someone, or are thinking of someone – will stare.

They forget that they are staring and they need a reminder to stop.

7. You are maybe mistaken

Perhaps this is all in your head.

If you really like him and you are unsure of whether the feelings are mutual, just talk to him casually.

All my life I was so afraid of talking to people because I couldn’t stop overthinking.

As soon as I started talking to people, I realized how easy it actually was.

It’s uncomfortable at first, but talking actually helps you bond with people and break the ice.

Even if he doesn’t, you can go to sleep with no regrets – at least you tried.

8. He is trying to get you to notice him

Maybe he is genuinely worried or scared to ask you out and is panicking.

When I was talking to my boyfriend last week, he told me that in his 31 years of existence, he always felt nervous around women he genuinely liked.

Even in our relationship, it was me who made the first move.

Not all men handle anxiety well.

And there is a chance that he is waiting for you to notice him so that he can talk to you at ease later.

9. He wants to ask you out but doesn’t have the courage

A lot of men feel intense pressure to ask out girls because girls very rarely make the first move.

Honestly, that needs to change.

But if you feel like he really likes you and is constantly trying to get your attention – break the ice.

Say “Good morning” or just smile at him.

Give him a little nudge to help make things easier.

You can even ask him about work/class.

There is a chance that he also really likes you and is trying to see or surmise if you like him too.

You never know what’s really going on in someone’s head unless you ask him.

If you feel that he is staring at you day in and day out, the time is now right.

Simply talk to him.

You don’t have to make a move. Just talk casually – ask him how his day is going or what he’s up to later.

That will help you understand if the feeling is mutual and he has a crush on you too.

11. He cannot get you out of his head

Maybe he really likes you and just cannot get you out of his mind.

I had a guy stare at me in my class all the time.

He was also my friend.

He told me that he could not get the concept of us dating out of his head.

After I sat him down and explained that we could never be anything more than friends because I was genuinely not interested, he understood.

He never stared at me again.

In my case, the feelings were not mutual.

But I know a lot of people who have started dating only because they both sensed that they genuinely liked each other.

What do I do if my crush is staring at me?

Honestly, if you are really into him and you feel the staring is somewhat normal (and not creepy), then you can totally make a move on him.

Just ask him out on a date.

It’s okay for a girl to ask out a guy, please don’t feel like society dictates that guys should always make the first move.

I have been quite forward in my dating life and even with my current boyfriend, I made the first move.

If you don’t want to date him but the staring is a little too much, then you have all right to know why he stares at you.

You can say any of the following:

There may be a legitimate reason why he is staring at you. So, keep an open mind when you talk to him.

It is definitely hard when you’re young and lack social skills, but a conversation is the best way to put everyone at ease.

Just be honest and casual.

You don’t have to overthink it.

Here are a few more posts you may find interesting: 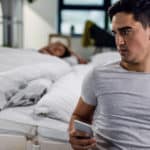 Does He Love You if He Cheats on his Girlfriend with You? 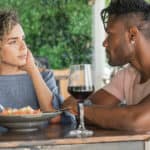 My Boyfriend’s Ex Wanted Him Back, Here’s What I Did