You’ve not been in this situation before.

And all of a sudden, this guy is telling you things about himself that he’s never told anybody else.

What could be the reason?

And why of all the people is he choosing to share that part of himself with you?

Is there something more than friendship on his mind?

What does it mean when a guy opens up about his personal life?

When a guy discloses a lot of personal information about his personal life, it doesn’t necessarily mean that he is in love with you or wants to build an emotional connection.

Most men do not feel safe sharing their emotions with people.

That’s because men (as compared to women) are judged more harshly when they share their emotions.

Because they are constantly judged or criticized, their emotions often are bottled up till it reaches a boiling point.

So, when they find a person who is very non-judgmental, logical, and level-headed, they feel very safe and often share what’s on their mind.

So, if a guy is sharing a lot of personal information, it most probably means that he feels safe talking to you.

But of course, that’s not always the case, there are loads of other reasons as to why he might be opening up to you. Let’s see what those reasons are.

This is one of the most obvious reasons why he is opening up with you.

If he’s known you for a while and the trust has been built over time, then don’t doubt his intentions.

He has obviously been around you long enough to know that you won’t judge him or won’t mock him.

So, he trusts you and is confiding in you.

If this is the case, just listen. You don’t have to contribute much. You can empathize from time to time.

2. He’s bottled up too much and needs to spill

They tend to get angry or explode if they keep their feelings in for too long.

So, it’s completely alright if he just needs to unload his stress and let it all out.

Just pay a listening ear and be kind.

If a guy has seen a woman go through a lot of personal troubles herself, then he feels you will understand his pain.

After I found out that my ex was cheating on me and I went through a painful divorce, a lot of men and women started sharing their relationship woes with me.

They knew I’d understand and be able to help them out in some way.

They felt I was experienced enough to listen to them without judgment. They felt safe talking to me.

Likewise, he might have a very good opinion of you, and that’s why he feels safe sharing his personal troubles with you.

Another reason why he could be sharing so much personal information with you is that he likes you.

Men know that the key to a woman’s heart is through emotions.

When they show that they’re sensitive and emotional, women tend to build a strong emotional bond with them.

So, he could genuinely like you and want you to feel safe with him.

That’s why he is sharing so much personal information with you.

5. He is a natural sharer

When I was initially dating my current boyfriend, I found it peculiar that he was being so incredibly honest with me.

He talked about his past and so many dark areas that I thought most people would like to keep hidden.

However, I later learned that is just the way he is. He is an extremely honest bloke who has nothing to hide and loves to share.

So, if you run into a person that is overall super honest with their intentions and loves to talk about their past no matter how dark or horrible it is, appreciate them because you know that there is no sugarcoating the truth.

6. He is trying to get you to open up

A lot of men know that women open up if they start becoming emotional and engage in a lot of conversation.

So, if a man wants you to share a lot about yourself, he will talk about himself as well.

It isn’t a bad thing always.

But if you feel like he is overdoing the conversations or overstepping his boundaries (which you have clearly laid out to him), then confront him and politely take a step back so he knows that he’s crossed a line.

7. He may be trying to test the waters

If you both are dating and he is sharing personal stuff with you, it’s totally normal.

It just means he is trying to see your reaction and see if you are compatible with him.

So, just be open to listening.

Whenever anybody is telling you anything, always keep your mind and heart open.

Once they’re done sharing, you can decide how to react. Please know that this is the only way for you to understand what a person is like.

Listening actually helps you understand who is in front of you. It gives you an in-depth understanding of what they really are.

So just be kind and listen without prejudice.

8. He is genuinely falling for you

Unfortunately, sometimes we don’t want this to happen but it does.

Men who are friends, colleagues, or classmates sometimes fall for you when they’re able to confide in you so much.

They start feeling like they cannot talk to anyone else because no one else will understand.

And they start developing strong feelings for you when they’re able to share so much of their personal information with you.

It’s okay if both of you are dating each other, but if this is not what you want, then it may be time to withdraw gently and talk to them explaining why you don’t think this is a good idea.

9. No one else understands

Even if he has a lot of friends, he may not actually have anybody that he can talk to without being judged.

As I said earlier, men find it hard to discuss their emotions with people because people often judge them way too harshly and they find it difficult to find people to trust or talk to.

So, sometimes all these men are looking for is genuine friendship.

And if he’s found a good friend in you, then appreciate it especially if you are able to talk to this person too.

If both of you have just started dating and you feel he is sharing a lot of personal information, it could be that he is just trying to get it all off his chest so that there are no speedbumps later.

Whenever I started dating anyone, I’d be very honest and lay my cards on the table.

I wanted people to know what they were getting into.

And likewise, a lot of people prefer getting everything out in the open so that they can decide whether you are the right partner for them.

They want someone that isn’t fazed about their past.

And they don’t want to waste their time hiding or keeping secrets only to reveal them later and scare you off.

11. He just wants to sleep with you

I personally know men who share a lot of personal information (some of it may even be false) just to garner sympathy and gain a woman’s trust.

I am not saying that all men are like this and I’m definitely not generalizing. But I’ve run into my fair share of men who use this strategy just to get a woman to lower her guard down.

It’s very unfortunate because if they can just be honest about their wants, they’ll probably find people who have the same needs as them.

However, it is a slightly sneaky move on their part.

So, if you meet a man who doesn’t know you from Adam and is revealing way too much personal information about himself, be on your guard because there is a very good chance that he just wants to sleep with you.

How do you know if a man is falling for you?

Honestly, if a person is going through a lot, he may be sharing just because he trusts you.

But it is possible that he also likes you and that emotional bond is growing closer.

The only way to know if he is falling for you is to talk to him about it.

Be very gentle and honest and just ask him what is happening. Ask him what exactly is he looking for in this relationship.

As a friend and confidante, it is in your right to know what’s happening so that you can know where you stand.

You need to know if he wants to be friends or if he is looking for something more.

What if he is with someone else and he is sharing so much personal information with you?

If a man is already married or with someone and he is being way too emotional with you, understand that he is:

Either way, it is a bad idea to get involved or even think of a relationship with someone who is already betrothed but is spilling the tea to you instead of his partner.

Talk to him and be honest. Ask him what exactly is happening and why he is sharing so much with you.

It is in your best interests to know what he wants from this relationship.

If at all he is looking for something more than friendship, then at least you’ll be equipped to handle it now that you have this information.

My suggestion is to keep a distance and try to remain friends.

I have seen so many of my friends and acquaintances get into relationships with married people only because they felt love and sparks while the person was unloading their emotions and personal baggage.

They’ve ended up breaking families and those relationships (from what I’ve seen and witnessed) usually don’t last because they’re built on shaky grounds.

What if you both are single and he is sharing so much personal information with you?

If both of you are single and he is sharing so much personal information with you, weigh the pros and cons.

See if it’s coming from a place of hurt and honesty. See if he is emotionally mature and if he is ready for a relationship.

Some men are so hurt that they still need time to heal.

I would suggest dating him for a while to see if both of you are compatible and can form a good and solid friendship.

It will usually end in heartbreak and loss. Because a person needs time to heal right after a relationship.

So, if you really like this person, give it time.

I hope this post helped you figure out why a guy is revealing so much about himself and sharing so much personal information with you.

No matter what happens, be slow to judge and give it time.

Do not take hasty decisions and be gentle when talking to someone that has a lot of emotional baggage. 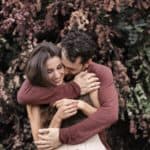 27 Subtle Signs He Will Never Let You Go