It sounds contrary, doesn’t it?

If a girl likes a guy, why would she reject him?

Is she playing games or trying to pique his interest further?

It’s easy to jump to conclusions and label her as “difficult” or “egocentric.”

But there are genuine reasons why a girl would reject a guy she likes and today, that’s what we will be diving into.

1. She is with someone else

This is by far the most common reason why a girl would reject a guy she likes.

You have to understand that throughout our lives, we will develop an attraction to the people we meet.

It’s not something that can be helped and it’s only human.

It’s something that we have little control over.

But if she rejects a man she likes because she is committed to someone else, then kudos to her for respecting her partner and relationship.

It means she is respectful and loyal to her partner.

So, if at all you’ve developed feelings for someone who is already committed, let her go.

It doesn’t matter if the guy is not good for her or if you feel she could do better.

She’s made her choice, respect her decision and move on.

2. She doesn’t feel he is right for her

I’ve been on many dates when I was single.

And I’d go out with people that I liked and found easy to talk to.

But something would turn me off.

For instance, there was this one time, I went out with a very outgoing guy – I liked him. But he wouldn’t let me talk at all.

He even ordered a drink for me when I said I didn’t want a second one.

He was forceful and really pushy.

So, although I liked him, I knew enough to know that this would just go up in flames if I continued seeing him.

So, I turned down the second date and explained that it was just not going to work.

But a lot of people understand that just because you have feelings for someone or like them, doesn’t mean the person is right for you.

It’s an emotional maturity that comes with dating and spending enough time in relationships.

3. She is not over her partner

I have a friend who is best friends with a man she really likes.

From what I’ve heard, he sounds like a really nice guy and he genuinely wants to have a relationship with her.

But she keeps rejecting him because she is still hung up on her ex.

She hasn’t moved on from her previous relationship and she knows it won’t be fair to the guy she is friends with because she won’t be able to give him 100%.

If this is you, and you are seeing someone that has just gotten out of a long relationship or a messy one – proceed with caution.

More often than not, this may turn out to be a rebound relationship for her.

After coming out of a relationship, people are vulnerable and can’t really make wise decisions when it comes to dating.

It takes time to heal and become mentally strong so if you are considering seeing a woman who is not over her ex, give her time.

You don’t want to get hurt moving forward.

4. She doesn’t want a relationship

There are a lot of people in this world that just don’t want to date because they are not comfortable in relationships.

They prefer being single and there is nothing wrong with that.

However, it is a difficult concept to accept because societies often pressurize us to find a partner before a certain age.

So, she might like you but she may just not want a serious relationship or be ready for a serious commitment.

It is as simple as that.

5. You may be moving too fast for her

Dating is very different for women and men.

When it comes to choice, hands down – women have it easier than men.

However, when it comes to safety, women are always more cautious due to reasons that you probably already know.

So, women who have had a lot of experience dating and are really serious about finding a partner prefer to take things slow.

They understand that dating a person takes time because you cannot learn about a person in a day.

They like to see how you respond to stressful situations and how you take no for an answer.

I remember dating my partner in the beginning and I could feel him coming on more strong after the second date.

I felt like things were moving too fast so I told him to take things slow.

In the end, it all worked out for the best.

But if you feel she genuinely likes you and she’s asking you to go slow, then just ask her what she means by that.

If she really likes you and wants to keep dating, then great.

But if she is unsure about things and is not giving you a clear answer, then maybe she is not the right person for you.

A lot of women, unfortunately, don’t have very healthy upbringings.

Either they were neglected as children or they just didn’t get enough of their parent’s attention.

This can push them into thinking that love is only pure and beautiful when it’s hard to get.

So, sometimes women reject guys they like because they want them to try harder.

In this case, leave.

You do not want to date a person that is playing mind games with you – because if you say yes or continue dating this person – you are going to have to play mind games all your life.

It’s exhausting and is not going to help you achieve any success in other areas of your life.

You will constantly be arguing, fighting, or just having long bouts of silence.

You are better off finding someone that’s more mature and capable of speaking their mind to you.

If a woman has been in many abusive relationships or has been disappointed many times before, they eventually end up sabotaging themselves even if they do end up liking someone.

This is something you have no control over and you kinda have to make peace with it because it is a fear and a challenge that she has to overcome personally.

There is nothing you can do from your end except be kind and understanding.

So, if she is saying that she is scared to date, ask her if there is anything you can do to help ease her mind.

You can also suggest taking it slowly.

What to do if a girl rejects you?

Alright, so you felt like it was going somewhere and you thought this might eventually lead to a good relationship.

But out of the blue, she says it’s not going to work.

What do you do?

Don’t pressurize her or force her to take you back – that’s not the way to go about it.

You both are two consenting adults and you have to respect each other’s choices.

So, find out what’s on her mind.

Ask her to be honest and listen with an open mind – don’t interrupt.

Find out the real reason why she is not happy dating you.

If at all she provides a reason that has nothing to do with you and is more about what she is looking for in life or that she is not ready to date, accept it with an open mind and let her go.

2. See if things can work out

In my case, I felt the man I was dating was taking it too fast.

I had come out of a heavy relationship and I was scared to move fast – I needed time.

He was very understanding albeit disappointed but he told me that he didn’t want to lose me as a friend.

So, we continued to talk – but this time there was no pressure.

We were both able to open up to each other willingly without any pressure of dating or making a decision.

Within 3 weeks, I asked him out and made the first move – the rest is history.

We have completed over a year of dating and for the first time, I am in a healthy, loving, and respectful relationship.

Talk to her and ask her if you can take things slowly.

If you don’t want to wait for her, don’t.

End things mutually and see other people if you wish – especially if she is clear that nothing is going to happen.

Don’t wait if you don’t want to.

You have as much right to date other people as she does.

In the end, just be open and communicate honestly.

If after all attempts trying to talk to her and date her, she still refuses – let her go.

You’ve done your best and its obvious things are not going to work out.

Remember, a relationship works if both people want it to work.

You can’t have a relationship with someone who doesn’t want to be in one with you.

I like to keep a journal and reading it has given me a lot of insight into people I’ve conversed with as well as my behavior and how it could be improved.

If at all, you notice that a lot of women you go out with point out certain flaws – then maybe it’s time to dig a little deeper and see if there is any truth to that.

Are there reasons why people genuinely don’t want to date you?

If at all, you have a tendency of choosing women who have certain issues in common – then there is something wrong with your filter and you might need to heal in order to start choosing better people.

We mostly attract people close to what we are.

5. Shake it off and move on

If anyone tells you it is, please know that it isn’t true or they were really lucky in finding a partner.

Some find their partners when they’re 14.

Some find their partners when they’re 56.

I found mine at 29 after two long relationships with people that were just not right for me.

Now, if you are dating and you feel like you just aren’t finding what you are looking for or finding real women is a challenge then please know that this is a good thing.

It only means that:

This does make it challenging to find a partner. I’m not saying it is impossible – but it is definitely harder.

So, if you see this door closing, move to another.

Don’t wait outside the door, waiting for it to reopen – you’re only going to be disappointed.

Respect her choice and your time and move on to the next.

Here are a few more articles you may find helpful: 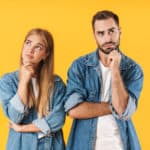