You feel you’re getting along great together.

Maybe you’re even chatting on social media and you both have good conversations.

But he’s not making a move or even asking for your number.

My fiance was the exact same way when we started chatting.

For days on end, we chatted and spoke about everything from astrophysics to what type of hot beverages we enjoyed.

But he wouldn’t make a move.

Things worked out great in the end.

Based on his response and doing a little digging, I’ve discovered why guys won’t give you their number.

Here are a few reasons why he won’t give you his number or ask you for yours.

9 Reasons why a guy won’t give you his number

1. He doesn’t want to scare you off

Because some men have ruined it for everyone, decent guys wait.

They’re really scared they’ll look clingy or desperate and they genuinely don’t want to scare the girl off.

That’s why they hesitate or wait for the woman to make the first move.

In my case, this was the issue.

My fiance loved the conversations and he didn’t want to hurry or be hasty.

He wanted to take it slowly, so he delayed asking me out.

It was a dating app, but he wasn’t in a hurry.

In case you’ve been chatting or talking to this guy for a long time, and you feel there are sparks, then you can ask him out.

It doesn’t need to be ceremonial – ask him if you want to grab a coffee together.

Coffee is perfectly acceptable and totally not a high commitment.

I won’t generalize but as women, we are often better at reading cues and signs than men are.

Men need the facts spat out straight. It has to be direct or they don’t get it at all.

This is why they like solving problems. They don’t see the need to talk about something unless they want a solution and they kinda treat women the same way.

So, if they’re waiting, they’re probably waiting for a HUGE hint.

Something that is outright direct and helps them understand where you stand.

If he is really enjoying your company, he could be waiting for you to make a move or show him that you like him before he asks for your number.

3. He is a womanizer

Some men are really good with women.

He told me he never makes the first move and always waits for the women to do so.

He drives them over the edge with flirting and waits till they ask him out or take it to the next level.

I found his honesty very refreshing and then spoke to a few friends who confirmed this is how guys behave when they are very experienced with dating.

If you find that he is flirting with you constantly and always leading you on but makes no attempt to give you his number or ask for yours – chances are he is a womanizer or an experienced dater.

This isn’t necessarily a bad thing, but these people usually don’t like to settle down so if you’re looking for something more than a casual relationship – this may not be your best bet.

If however, you are interested in taking it forward, then just ask him out.

4. He is very shy or nervous

Some men haven’t had that much exposure to women.

It could be cultural or just his choice.

In this case, giving you his number or asking for yours might seem too forward.

And it is totally out of his comfort zone.

In this case, you can talk to him or head the conversation in that direction to see if he is interested in taking it further.

A lot of guys just don’t have dating experience and if they usually are very awkward or shy – it could be the plain and simple issue.

5. He is seeing someone else

A lot of guys who are in committed relationships still flirt or get off on conversations.

I remember meeting a guy from a dating app after days of conversing who finally told me after our first date that he was married with a daughter but liked meeting women.

To each, their own.

But it’s better to know where you stand so you can always just bring up the conversation and ask him.

6. He is scared of losing your friendship

Perhaps you both are good friends or buddies.

Maybe he enjoys talking to you or opening up to you.

And he is scared of losing that friendship by asking you out.

Things do get awkward when we date someone and that fails – it is difficult for a lot of people to start seeing each other as friends again.

So, this might be his worry. In this case, it is better if you just ask him.

And based on his response, you decide whether you want to go ahead and try dating or keep the friendship as is.

7. He has come out of a bad breakup

When a person has come out of a very bad breakup and is still healing, he may not be ready to date or take it to the next level.

Perhaps he is quite comfortable talking to you and wants to keep it at that for now.

He is not ready to get too close to you or let anyone in for that matter.

So, that could be why he won’t give you his number.

8. He is protecting himself

I know girls are usually more cautious when dating because there can be some pretty messed up guys out there.

But the same holds true for the situation reversed.

And some girls are kinda clingy or psychotic.

He may have had a horrible experience with a girl and he is now scared of giving his number to people he doesn’t know that well so he is cautious.

And he wants to get to know you better before he gives you his number or asks for yours.

Maybe you are reading the signs wrong and maybe he is just conversing with you because he likes you as a friend.

Perhaps there is no deeper meaning and he just hasn’t seen you in that way yet.

Sometimes we just read the situation wrong because people are extra friendly – it can just be a happy coincidence.

How do you convince a guy to give you his number?

You tell him that you’d love to chat or be able to talk to him at length and give him yours.

That’s what I did when I was dating.

Sometimes, men are being gentlemen because they don’t want to come off as pushy or creepy – so they do wait for women to make the first move.

I’d just say I really enjoyed the conversation and would like to know them better. I’d give them my number.

Most men if interested in taking it further will ping you almost immediately with a friendly hello.

Either way, take what you get and be proud of yourself for being an open and honest communicator.

This world needs more people who can communicate what’s on their minds – direct communication works best in dating and relationships. It makes things so much more simple.

How long should you wait after a guy gives you his number?

You can either text him immediately if you have already gotten to know each other well or you can wait for 1-2 hours.

I suggest not playing mind games.

Text when and if you are free – there is no crime in being open and nice.

It shows that you are very forthcoming. At the same time go easy and slowly.

Save the personal information for face-to-face meetings.

What does it mean when a guy doesn’t contact you?

It means he is either too busy or just not interested. Perhaps he doesn’t want to date right now or he feels you’re not a right fit for him.

Either way, it’s not on you.

And it is completely okay.

Dating is all about finding compatible people who share your goals and values and also reciprocate the interest you show in them.

It isn’t the end of the world. 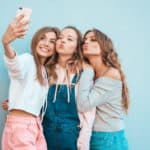 7 Reasons Why She Takes a Lot of Pictures of Herself